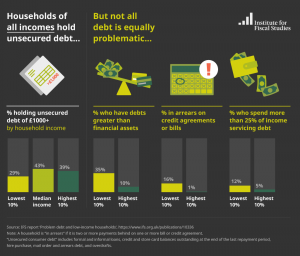 Research has been carried out by Institute for Fiscal Studies, funded by Joseph Rowntree Foundation and Economic and Social Research Council into the debt holdings of households in Great Britain, which have been a subject of attention and concern amongst policymakers and the general public. In particular, the heightened awareness of unsecured household debt or ‘consumer credit’ such as credit card debt, hire purchase agreements and unsecured loans.

Around half of households in Great Britain in 2012–14 had some unsecured consumer debt, with 10% of households holding over £10,000 of such debt.

Almost half of this kind of debt is from formal loans (43%), with credit and store card debt (25%) and hire purchase debt (21%) the next most significant categories.

Those with lower incomes are less likely to hold any unsecured debt, but are more likely to be in ‘net debt’, with unsecured debts of greater value than their financial assets.

Those who held debt in 2012–14 were likely to have held debt for a number of years.

More than half of those who had debts when interviewed in 2012–14 had debts on all four occasions they were interviewed (spanning a period of six years).

While debts can be a sign that a household is struggling to manage its finances, they can also be an appropriate and manageable response to negative shocks or an anticipated income rise.

It is important for policymakers looking to address ‘problem debt’ to distinguish between these different possibilities, based in part on the wider economic circumstances of households